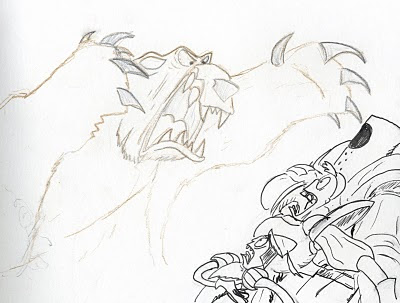 This here be Sir Daniel, Sir Dncan and Tim terryfied by Bruno the bear (currenlty woke up from hibernation). Normaly Fortesque claims to have beaten dragons but he tells that this bear is far dangerous than a dragon dring hibernation. Basically, there are no dragons in Gallowmere yet so bruno is the bear that take son the role ans a comedy/terror animal. Usually attacks anyone near his territory, whenever he feels like it and the disbanded gang of ex robin hood.

Here i have drawn the thumbnails for the wave arm dance move, will be used in a experimental animation

Here is a test of cardboard for the experimental animation
A few faces and colours of the cyclops character done on flash
Posted by Thomas Spettel at 10:14