smaller work of the world of arta

video
animatic, continue from the other arta flash animatic,no sound
video 2
pitch of two parakecium guards walking cycle. I had an idea of putting two hand drawn animations together because these two guards are suppose to be walking infront of the three legged machine 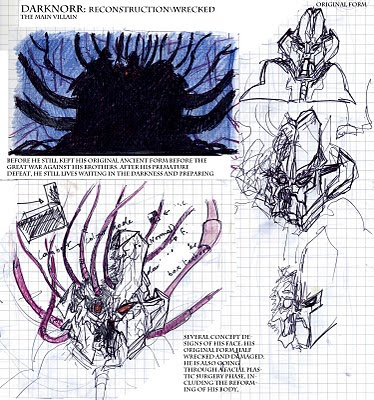 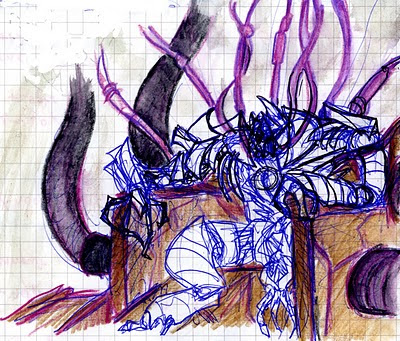 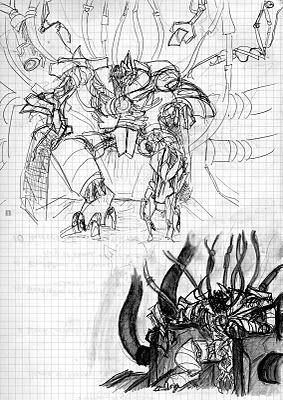 Posted by Thomas Spettel at 15:54 No comments:

When I found out about the group assignments I was still back in Switzerland near the end of the Easter holidays. On the day I was meant to fly back to Falmouth I was delayed but the sudden volcanic ash that had spread over European space, thus i had to stay back in Switzerland for four days straight, only then was I able to fly back to Falmouth. When i got back to the university, everyone had already formed groups before I even got the chance to know what was going on. I had to rely on small amounts of information during my four days of delay. In the end I chose the "title sequence" along with three other students, one was stuck in London, the other two had not bothered to turn up in the lectures. I partnered with Brian Williams, Tom Gameson and Christian Smith, we are put together as a "last minute" resource.

We sorted out what each of us would be responsible for in the group project. Me and Tom were responsible for the artwork, conceptual designs and draft storyboard. I was also entitled to draw conceptual and final drawing as well as animate the "fly" of our work. Since then, my sketchbook composed of the first 2 to 3 weeks of post production of fly drawings. I posted most of drawings and art work on my blog. Brian Williams also created a "facebook" group section for our group to post up artwork, test animations and discussion topics about the work. We were in post production mode for the first weeks of the project. For referential work i had to study upon the appearance of the fly and draw it in a certain style. Tom and Brian wanted a simple style of the fly, basic outlines with much less detail as possible. I thus had several images of the fly, frontal and side view as well as a few more angles. We also needed a logo and I designed the first images. We wanted something to represent death, a skull image or a gas mask depicting a slight
touch of post apocalyptic. I drew the fly frontal face and it almost looked as if it was some sort of death mask. Brian edited and polished it into a proper logo symbol while Chris used it in after effects along with the title and made a grand title to our ending. 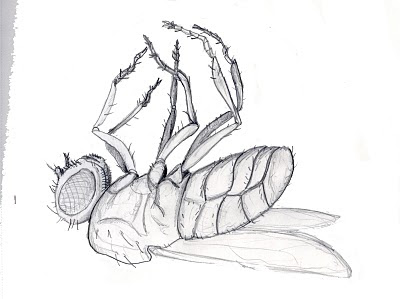 Tom drew up the first parts of the story board, more of a draft and we were at first a bit disorganized. Only me and Tom bothered to show up in the studio while Chris and Brian stayed at home and worked, Chris came in a few times, Brian...hardly. The two are excellent after effects students and I value their grand efforts but I wished we were a bit more organized. Tom designed the final part of the 25 second animation as the fly would fly off a flag pole, overlooking the city and would fly towards the screen and slowly form the logo and the title. That part was to show that the insect had dominance over the world, thus described in our brief. Towards the 4rth week or 5th of post production, we finally decided on how the layout would be, basically, once again, Brian was late showing up, took responsibility for designing the story board and had not produced one yet and then finally came up with the animatic. We finally took the decision that it would have a comic book style layout. The fly would fly from one frame and the animation would view different sections animated of the comic frames.

I took the role of animating the fly, drawing up more finalized pieces on flash and photoshop. I leaned how to paint digitally and drew up some other artwork for the project, including scenes, small backgrounds. Most of the files were and animation tests were placed on facebook and given to Brian. Chris also made a good contribution of after effects with Tom's art. In all, Me and tom were in charge of the artwork and the animating sections while Chris and Brian were in charge of the after effects, polishing and final touching details.

Also at the same time, the three members got another project from Kathy, BA digital animation sketchbook coordinator. She had asked for a after effects job on some fashion project, thus we were given an extension of three days after the final deadline on Friday the 29th of May. We gave everything, artwork, animations and final evidence to Brian to put it all together. he coordinated most of the orders and requests online. At last we had eh final animation but Brian needed us to complete one last amounts of rendering. Tom had already written his evaluation and had no space, Brian was preoccupied and so was Chris. Thus it was left to em to render the final "Tiffs" on after effects. That was the hardest part of the job since my understanding in after effects is not very good. I managed to complete his instructions with the help of the 2nd years working in the animation studio.

I am however a little disappointed on my part, I spent the entire post production coming up with all sorts of artwork, and animation tests and not all of them made it into the animation, but I suppose that is what to be expected for a 25 second title sequence. Also, i would like to note out how one of the members of our group should know that we were competing against another group doing the same project. As much as I appreciate his great efforts for his work in after effects and idea contributions, he makes a bad director. Although we did not really appoint that role to anyone. He did take charge of handing out instructions but failed to turn up for discussion meetings in the studio, failed to come in during Thursdays to present a story board and animatic to Derek Hayse and Denzil Monk. All in all, the work looks very promising. What I would like to admit is the help, Brian gave me about painting artwork digitally. Despite he never turned up to our meetings, he does make good work. 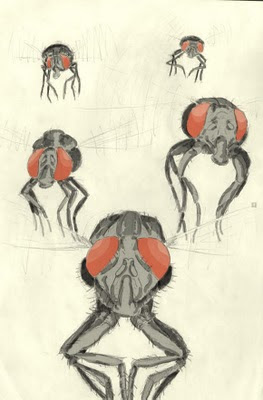 Posted by Thomas Spettel at 08:05 No comments: