Vermin: a common scavenger amongst rat-like creatures. This is a replacement to a small crab like creature in the stop motion story board. This is actually a start on my series of arta, here I am practicing its movement. At this moment I am making a small animation with this creature for the begining intro of my world of Arta. 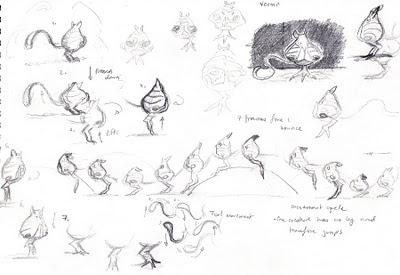 Posted by Thomas Spettel at 06:14 No comments:

Here are two animations that I have been working on. The first is from the Evolution Sketches. a 2D walking cycle. The other is part of my "pencil case" series of Pixiliation using the surroundings of the animation studio.

After the walking cycle animation test, I decided to try a walk while a species of creature evolves through time. I have seen the cycle of man 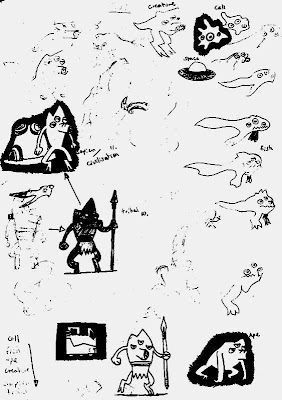 The cell form is the first basic life form. We all start small and in the sea which evolves a tail. One extraordinary mark of evolution are the eyes.

The fish stage is when we have grown a tail and with sufficient strength, fins and a mouth in order to eat. It has been proven through fossils that the first life forms came from the sea and so our ancestors have spent a long time evolving their shape to adapt in the sea.

The next stage is when we move onto land. For the first time we grow limbs. Our fins become strong enough to shape into legs. We loose our capacity to swim and gills but we develop lungs to breath onto land and absorb more oxygen.

Once we are on land, our legs evolve. Large or longer. Our bones, muscle and tissues evolve as well allowing us to run away from predators, chase after prey and walk. 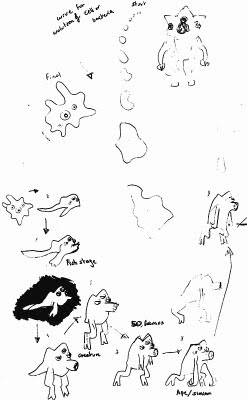 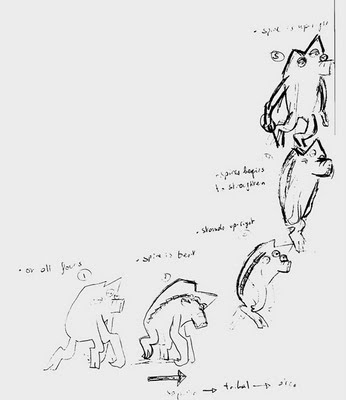 Through time again, the creature looses its tail and starts to evolve arms. These limbs are used to grasp or pick up morsels of food. Arms and hands are another mark of evolution because through time again but longer, our brains begin to understand what else could these limbs be for.

The Ape stage is when our creature has evolved a long way through time and is at a stage of walking on four legs but the arms are much longer and the spine is bent forward. Those claws can grasp fruit or larger pieces of meat.

The Sapient stage is when the creature rears up, bending its spine upward and starts to straighten. This allows the creature to walk on two legs but the arms are no longer as long as they were but can still grasp. The creature's complex brain evolves and soon the creature begins to understand a certain basic form of intelligence. later on the creature will enter a Tribal stage involving social groups but with the understanding of creating tools for survival. The last two stages is Civilization: A period like today were the creature has fully evolved to create and build more tools as well as building, vehicles and certain forms of subjects in society. The last stage is Space: were the epic evolution comes to a halt in which we are able to leave our planet and travel through space discovering other worlds and interacting with them.

The next project I will make a 2D animation walk cycle of this creature's evolution.
Posted by Thomas Spettel at 07:12 No comments: