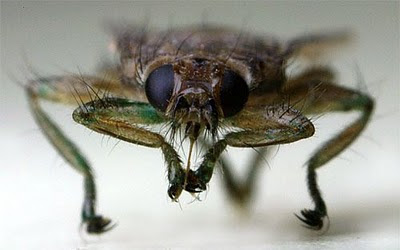 Here is a reference of what the fly in the project that the goup have thought of, its the colour thats intreging, a sickly brown green but this image is just for reference.
Here are some concept artwork of the fly, the animation will be a mix of 2d drawing, in flash and after effects.
The Conceptual i part of my job in the post production, as well as to animate the fly action moves. 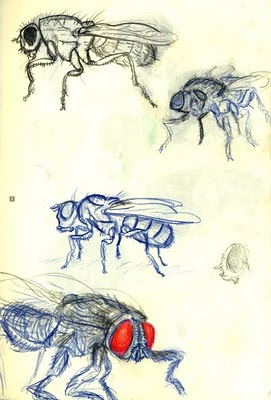 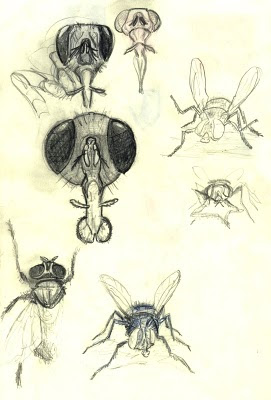 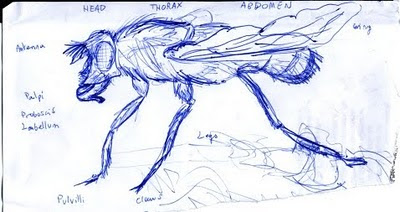 Posted by Thomas Spettel at 09:18 No comments: 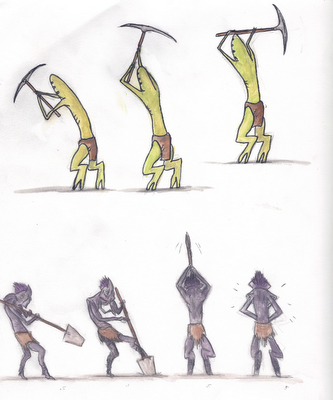 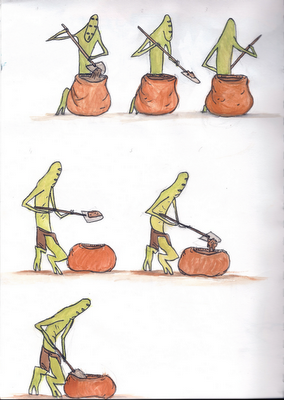 Posted by Thomas Spettel at 03:54 No comments:

The main Knight characters for my "Medievil: The Living" animation project me and my brother are planning, he writes the script while i draw, he and i come up with good ideas and I am hoping to produce this as a merchandising cartoon series for the animation world. Iw ant to re create funnz events that happened before the main events of the game Medievil. Making fun of english history and as my twin does it, he thinks its funny. The characters so far (from left to right) are a made up character (based from sturngard) is Sir Duncan, a giant man but with a soft heart and a liking for bringing a good message to children, next comes Captain Sir Daniel Fortesque (and we all know hsi story, a bit of a liar, a coward but a good man) and last of all, the squire Cany Tim (portrayed as a bit of a sissy) 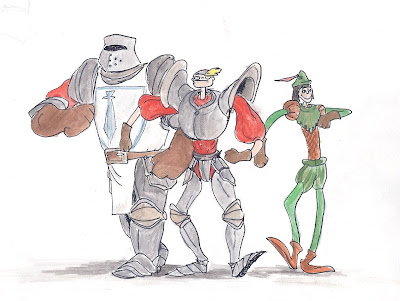 Drawing these guys helps me alot with human characteristics and movement. I am not good at drawing people so this allows me to understand the cartoon essence. 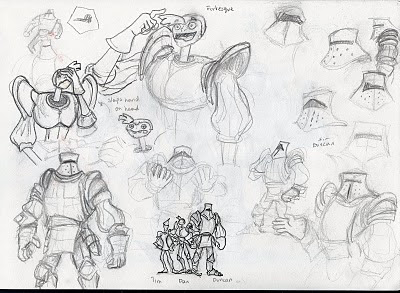 Daniel is portrazed wearing his ceremonial armour, blonde witha rather small but square head. Trying to keep his skull accurate from the game but with skin on, his jaw bone and his other eye.
Sir Duncan, is a character I thought up with my brother after he created the character "worm" for zarok. Duncan has a helmet on...constantly so we never get to see his face but thats the cool thing because its his helmet that shows us the status of obidiance and utter loyalty for Daniel (basically, Dan needs a bodyguard wherever he goes). The way we can tell 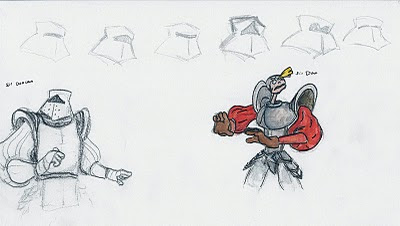 any emotions from Duncan is by his helmet. With the help of his visor we can tell what status he is in, confused, angry, sad or delighted. He reminds me of a heavily armoured Tutonic Knight...that would not hesitate to crack your ribs until lunch break...
Posted by Thomas Spettel at 07:39 No comments: 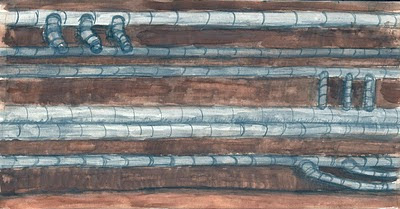 A little experiment i have been planning, to test the assumption of saving images as "PNG" or "PGN" however you spell it, it is one small sucsess, When I return to Falmouth I shall continue with the experiment which consists of scanned drawings placed as animation onto a painted or drawn background. Here are the images continuing to pitch the scenes or shots for the intro of ARTA 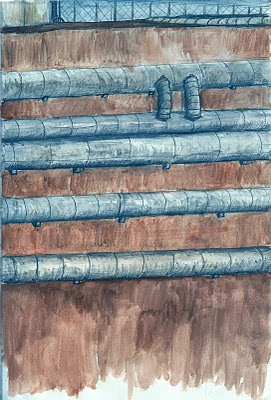 Here is when after the vermin has gone through the hole in the fence, he will desend along a row of large pipes, crawling down into a large mining pit where we will soon see what the situation is like in the badlands and in Hex industries (concept artwork of hex industries are on older blog entries)

Posted by Thomas Spettel at 07:32 No comments: