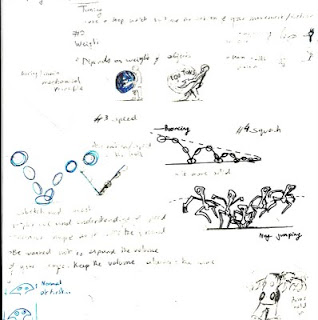 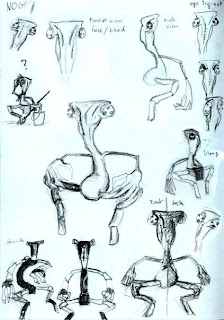 From the same concept as a hero only he represents the funny or comic hero. He becomes Ood's best friend in his quest to understand the world of Arta and free it from the grip of ill. Nog is of a very different species, a creature with three pupils in each eye,a very thin mouth and whose legs are wide apart. I wanted to have an amusing character for my future Arta projects. He is not very bright but can improvise on ideas. I used him to try out a jumping technique of animation using the same "ball bounce" skill.
Nog is in the air heading towards the ground. His head is back then moves slightly forward. When his feet touch the ground, he begins to bend his legs down. His head squashes in then stretches his body up and pushes on his legs to jump up. his body elongates a bit then comes back to normal after the jump. This is but a test to see how I can animate my characters through several techniques.
Posted by Thomas Spettel at 10:31