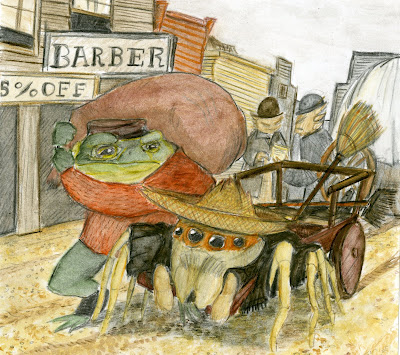 In my experience, I had no trouble with the pre production assignment for it was my best field of study. I love drawing; therefore it was not difficult to express my great gratitude and satisfaction of what I was assigned. The interesting part was that for this project, those who were participating as well, were given four cards, each describing character(s), show, style and setting. It felt like a good challenge though I had worries over the art style for I am not always familiar with British art or modern art painting. However, I put aside that worry for it helps if one is to work in the animation industry and use another ones style or form of art in the pre production.

The cards I got where; a frontier town for the setting depicting the old wild west. Recently I had been playing Oddworld Strangers wrath and watching animation concerning this topic and I was in a “wild west” mood. Also I watched the trailer of the animation Rango which its theme is based on a Wild West frontier town setting. I began drawing the background first since I always seem to normally draw the characters first. So I decided that the environment comes first.
The show was a documentary, thus an animation documentary. There are not that many I have seen apart from “Walking with Dinosaurs” series on dinosaurs, prehistoric beasts and life before the dinosaurs. There is also “waltz with basher” and Surf’s Up”. So for this I was to make my research into photographs, old illustrations for accurate clothing on the old west. There are not that many images or books which still hold old photographs of 19th century America but I managed. I wanted to ensure that I would not aim for the typical clothing and gear of the Wild West which is slightly exaggerated in popular culture.

I got the name Stanley Spenser for the art style. I am not familiar with British artist and was afraid of not being able to fully grasp the art style in an animation. I observed and studied the artist style that has a strong use of patters in his painting, particularly in clothing and landscape. It helped me with desert and sand. What was good to point out was the use of earthly brown(s) and natural earth colour palette I would use for natural colour. The only colour to stand out would be blue. So a lot of brown colours mixed would help.
The character is a street sweeper. How does one see that in the old west? Imagine it. A street sweeper is the lowest form of job in a town, clearing up rubbish and detritus. For characters, I looked back towards my animal firm project where all the characters are drawn as animals. I like drawing animals as characters because it is a trademark that works in appearance for animation towards the public, it avoids me having to draw monsters and bizarre wildlife, its fun and it helps me with my drawing skills.

It is enjoyable drawing the characters as animals and I wanted to make this pre production as if it was for a CGI animated film. Looking at Stanley Spencer’s art has a hint of realistic features in the self portraits, also because I watched the trailer Rango and all the characters has a realistic look in appearance.
All the characters are therefore drawn as desert American animals. Local people are seen as desert toads and lizards. Stanley Spencer paintings, their character stands out which gave me the idea of having the main street sweeper character stand out from the rest of the local population of the frontier town. The street sweeper is a Mexican jumping spider, an 83 year old street sweeper living in a frontier town. He has lived a long life before and during his life in the town and knows a few things on life experience. The plot will centre on him, following his movements, interactions with the locals. Most of the time it just focuses on the characters life, daily bases, observations of others, giving out useful advice and looking back at his past. At one point during the film he will help someone whose case is far more extreme and dangerous that the crowd he is used to, therefore a change comes and one should learn to accept new change and be opening minded. This will eventually make the people accept him for what he is. Most of the people he talks to are miners, prostitutes, a bar keeper and prospectors but he once speaks to a fearsome hired gunslinger and helps a random stranger who has a quarrel with the local mayor and upper class Farm businessmen of the town. By helping him, we would get involved for something he never wished to be part of, and using his knowledge and experience of the town to avoid suspicion.

The whole film would be aimed at a family audience, capturing drama and emotional concepts. It will also show how one should learn from his or her past and that the old deserve more respect and one can learn from them. I figured that the whole thing would work as a CGI which I presented during the pitch. I sometimes stake too long to explain and thus need to learn how to shorten things with finalised images and artwork.

All in all I enjoyed working, researching and exploring on this assignment. I always like to work in advance so that I never have to work under pressure. I know that pre production is my strong skill and learning from this can help me in the future if I was to work in the animation industry on a pre production project.

The observational drawing, which was part of the assignment, was enjoyable too. I got to draw with a fair majority of different drawing materials including paint. The best parts were drawing the female models. I guess it is maybe because I am a guy or the fact that I slightly got a bit bored of drawing the male model Andy from some of the same back angles. What I enjoy mostly is drawing the model without looking at the canvas. True, it may not be the best approach but I just like drawing the weird and the odd form, to try and get in into society and hopefully know it is accepted. Otherwise I think I have improved with my drawing skills on this.

One negative outlook would be that I am worried if I have gone in the wrong direction with the pre production. Should I have just drawn normal people instead of animals? Should I have based the plot on a more exciting scale? But then it is a documentary therefore accuracy is needed. I am still glad to draw animals as characters and express how they would work in my ideas. When I look at others work I see that all go for drawing the human body for their characters. But I know what I wanted to do for this project, the animal firm project during the first year is a good inspiration for me and I do not regret the decision I have chosen. I prefer animals as characters rather than people. It’s just more exciting.
Posted by Thomas Spettel at 03:15