In my time in the animation studio, I have started practicing "Parer-Cut" animation. From the recent Pixilation clips by Derek Hayes, I had begun my own clips. First I just wanted to try out some tests. As I am an insect lover I look 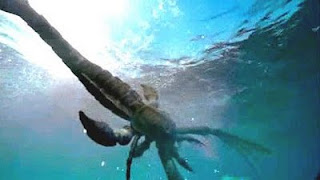 ed at some images of prehistoric insects and one came up as the sea scorpion. Imagine you could view a world back in time where all things began, in the sea and somehow it is a theme around Falmouth. So I have decided to do some sort of prehistoric animal documentary of the Silurian Sea similar to the BBC series of "Walking with Dinosaurs", "Walking with Beasts", "Walking with Monsters" and the all time "Chased by Sea Monsters" which shows each dangerous filled sea in prehistory.

As i am a Arthropod fan, I wanted to animate a sea scorpion doing something comical. At the same time, this test is one step ahead to what could be the opening credits and end credits of my paper-cut animation. What is different about this...SOUND. I took each picture "frame-by-frame" technique and posted the frames on the software "stop-motion pro". Then I uploaded the clip on a software called "Adobe Premiere Pro CS4". This allowed me to edit and cut my clips as well as import audio sounds to make the animation work.


This one, I used more cut-out puppets into the animation, although using the same background. The main plot is the sea life of the Silurian Sea where small prey have to avoid large predators and survive the conditions of the sea. Trilobites avoid the large Orthocone but one eventually gets ensnared by the claws of a Sea Scorpion who waits and ambushes. (link for images: http://dinorider.blogspot.com/2007/11/monstruos-marinos-2003-parte-1-los-7.html) 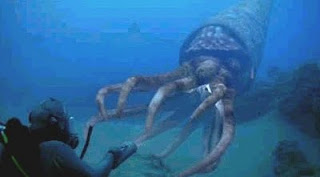 Derek Hayes also showed the class a cartoon from the Monty Python series. I enjoy watching Monty Python over and over again, whether the jokes may be simple or confusing. I tried a paper-cut animation with the same style when they use photographs of people and animate them in a funny and rude way. For this animation, I used the help of a student Brain Williams to record my own voice. I am very pleased with the result which is also a test for voice acting.

I seem to have a style of cutting out photographs but in future I will draw my own cut-out puppets.
Posted by Thomas Spettel at 07:23